Posted on June 9, 2013 by jennifermcguirefl

Just returned from the first leg of my Just Add Bourbon summer trop rock tour. Playing at Pompano Joe’s in Destin is a memorable one — perhaps the most beautiful view from the stage that I’ve ever seen, and plenty of Parrot Heads in the crowd! 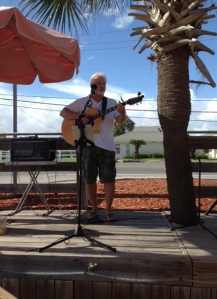 Usually that turquoise water that the Gulf of Mexico is famous for is my backdrop, but this time I got to look out over the white beach and aqua water as I played.

I then moved on to Tropical Isle in New Orleans on Bourbon Street. What a cool place! While the neon green Hand Grenades — New Orleans’ most powerful drink — were quite tempting, partaking in such a beverage and still being able to remember the words to my songs would not have been possible. Not doubt, a potential “Fool Button” episode. So I abstained…this time. A big thanks to Pam and Earl for having me! I was particularly impressed with Pam’s Hand Grenade-green Porsche , custom designed and painted to match the drink.

Big thanks also to  their manager Julie Nevius, who is a big Parrot Head. Also can’t forget the bartenders, Britney, Sasha and Paige, who clued me into the cool way the patrons sent tips and song requests to the stage through the little sucky tubes (like at the bank drive-thru, very cool!)

Make sure to stop by next time you’re in the Big Easy, and vote for Tropical Isle for Best Trop Rock Venue in the Beachfront Radio awards this year!

A special thanks to Derby City Dave, who stopped by with family and friends while in town for the Zydeco Music Festival. It was great seeing a good friend and Parrot Head extraordinaire from home.