Meeting of the Minds: Day 3 (a bit belated)

Posted on November 7, 2012 by jmcguireky

Let me just say that by Day 3 of Meeting of the Minds in Key West, I was so exhausted that I never got the chance to blog. Of course, the fact that I was hanging out with the Parrot Heads and my trop rock friends, and playing at Lazy Gecko until the wee hours, may have had a little to do with it…

Had a blast playing with Chris Sacks and the guys for the Sarasota Bay Parrot Heads!

Saturday was perhaps the best day of all. After relaxing on the beach at the gorgeous Casa Marina, I played for the Sarasota Bay Parrot Heads (my home club!) at the Ocean Breeze Inn. They had shots of jello, shots of concoctions that tasted like apple pie, shots Rum Jumbie…an awesome day, to say the least!

I joined some trop rock favorites on stage. Chris Sacks and his band were a blast to play with, and were definitely some guys I could hang with. They played the same kind of music I like — rockin’ trop rock. Mike Mangum sat in, cool guy; and Gary Philips joined on guitar, also a great guy; plus Duane Harlick from the Tropoholics — awesome voice, best version of Bob Seger’s “Night Moves” that I’ve heard. Lastly, John Frinzi took the stage — a charismatic guy with a great voice who apparently the girls really love! Had a blast playing and watching. Good times.

Enjoyed playing with Gary Philips at Meeting of the Minds. Great guy!

Took my family to the Southernmost Hotel Cafe for a late-afternoon lunch. My 8-year-old son and I were very pleased to know that the beach there, which the restaurant overlooks, has a bikini top-optional beach. The second pair of boobies my guy has seen so far (the first was on the jumbotron at the Cincinnati Buffett show). He seems pretty pleased with that. Wish my wife had let me take a picture to share.

Had a late night at the Lazy Gecko to play again with Chris Sacks and the boys, and hang out with John Friday and Danni Hoy (love her new CD!), then back home to Sarasota. Thank God I didn’t have to fly back up north to where it’s snowing. I don’t miss those days one bit. If my worst case scenario is Siesta Key, I’m doing pretty good in life! 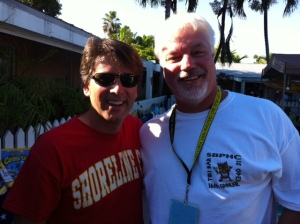