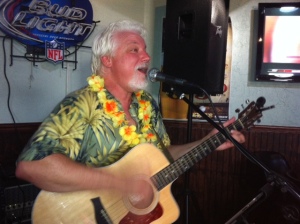 From January 23 through January 25 is the 7th Annual celebration of Fruitcakes In the Alley (FITA), held in the northern Orlando community of Altamonte Springs.  FITA is a weekend long, charity bowling/music event, which benefits Juvenile Arthritis research and treatment.  In fact, this event, which is organized and run by my PHriends in the Parrot Heads of Central Florida, has raised over $147,000 for Juvenile Arthritis since its inception.  Attendees will have the pleasure of singing along with bands and solo artists like the Trop Rock Junkies, Ronnie Tsunami and the Wave Riders, Bill Cockrell, deciBel, the Conch Fritters, Captain Josh, Jim Morris and the Big Bamboo Band, Nowhere to Rum, Jimi Pappas and, of course, yours truly!  We plan to exceed last year’s total contribution of $35,210.

Then, from February 28 through March 1 is the 4th annual celebration of Music on the Bay, held at Whiskey Joe’s Barefoot Beach Bar in Tampa. This wonderfully philanthropic event has been crowned the Trop Rock Music Association “Event of The Year” for both 2013 and 2014. Last year, Music on the Bay attendees partied with a purpose and through their generous support and gifts from their hearts raised $31,000 for Shriners Hospitals for Children! The list of artists performing is impressive and long, and includes Sunny Jim, Charlie Imes, John Frinzi, Jerry Diaz and Hannah’s Reef, Highway 1, Trop Rock Junkies, Jimmy Stowe and the Stowaways, The Boat Drunks, Jim Asbell and the Tropiholics, Latitude, Renn Loren, the Sauce Boss, Young Rebel Goombas, Jimmy and the Parrots, Ramajay Intercoastal, Captain Josh and Banjody, Michael J. Weiss, Jack Mosely Band, Jim Morris and the Big Bamboo Band, and of course, me again!  We’d all love to see you there!

It certainly is an honor to be included in these amazing lists of performers and to perform for such effective charitable events, and there’s more coming… But I’ll spare you the rest of the details for now, except to say that I love being a part of the Trop Rock community and truly look forward to performing every event including PHlockings at many Parrothead Club socials, Happy Hours, Birthday Parties, and yes, even Cruises to Cozumel (more to come on that in a later blog)!